The noodle is an integral part of various cultures around the world. This particular food has a long and complicated history and has deep roots especially in China and Italy, both being large consumers of pasta. Blogger Justin Demetri writes how it is a myth that Marco Polo introduced pasta to Italy from China, a statement believed by many people in the world. In fact, from reading other sources, one can find that pasta actually appeared spontaneously in different parts of the world. Pasta was already popular in Italy among Etruscans and Romans. They called their pasta “lagane.” On the other hand, in China, records indicate that pasta emerged during the time of the Han dynasty. In this dynasty pasta was called “cake.” In both of these countries, the noodle has come to reflect the culture, regions, cities, and people that cook them. It has gained an individual identity while at the same time multiple identities.

The noodle reflects many characteristics of the Italian culture and history. For example, one way the noodle does this is through the name specific pasta is given. Some pasta names commemorate Italy’s war in Africa. The tripoline pasta was Libya inspired while the bengasini pasta was inspired by Benghazi. Also, some pasta have been named to honor the House of Savoy, the Italian throne from the unification before world war 2. Mafaldine pasta was named after Princess Mafalda and the Regine pasta was named to reflect the name queen. Its shape also reflects its name through its ruffled like edges like a queen’s crown. Industrialization also is reflected through pasta’s names as some have been named after machinery. The route pasta was named and shaped after the wheel while the eliche pasta was named after propellers. Pasta names were also being linked to city names. Prosperity and living conditions could be inferred from ingredients used in local pasta. For example, in Piedmont wealth could be observed in the tajarin pasta which was rich in egg. Noodles in Italy reflect a lot of the country’s history. Throughout the years, the noodle has come to symbolize unification in Italy as well as to embrace each distinct region.

In China, the noodle reflects culture through its heavy presence in Chinese traditions and stories. For example, longevity noodles are eaten on birthdays and the length of the noodle is used to represent prosperity and long life. Noodles with gravy are eaten during marriage or when a family moves to a new house as a symbol of flavored life. During the lunar new year on February 2nd, dragon head whisker noodles are eaten to ask for good weather. Sweet dumplings are eaten in the western festival, and rice-puddings in the Dragon boat festival. Some noodle names originated from folklore in China. For example, the dutiful son’s noodles were named after a son cured his sick mother by feeding her noodles. In another story, old friend noodles were used to cure a friend and has now come to symbolize friendship. In a story called Crossing the Bridge, the noodle demonstrates a chef’s resolve to feed his isolated master in an island. The story also highlights the noodles length and characteristics to serve as the foundation for other ingredients. Through these stories and traditions in China, we can see how the noodle shapes China’s beliefs and customs. The noodle is an integral part of their culture.

The noodle plays such an integral role in the food culture of both China and Italy due to its versatility and health benefits. Naturally coming from semolina or flour, pasta is a complex carbohydrate food that digests slowly. This offers a slow and steady source of energy that keeps a person full longer. Its versatility allows pasta to be paired with other ingredients in many different ways. Due to this reason, it has become a foundation for famous diets such as the Mediterranean Diet. On the larger scale, pasta benefits are heightened by the ingredients it can be paired with such as vegetables, sauces, and other proteins to create a balanced and heathy meal. This I believe is what makes pasta so great and used in many meals throughout the world.

Most dictionaries define the noodle in the normal technical way as something made from wheat or flour mixed with water and or eggs. Whiles this covers the technical part of the noodle, it fails to define the noodle’s cultural significance around the world and what it has become to this day. The noodle is no longer an individual being but has become part of a greater whole. If I were to define the noodle, I would use something close to Chef Felipe Rojas Lombardi’s definition, “a universal food, complimentary to many other foods, and adaptable to many cuisines around the world.” 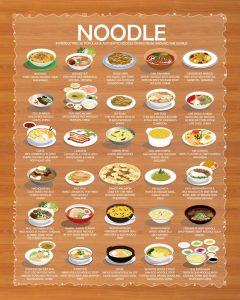 One Reply to “The Cultural Significance of the Noodle (Carlos)”