Noodles are a crucial part of one’s life regardless of their gender, race, and nationality. For example, China imported up to a high 18,000 kg of pasta in 2015, and each Italian is estimated to eat over sixty pounds of pasta. Although noodle consumptions are very high throughout the world, they all are a variety of noodles, all with different backgrounds based on their cultures, regions, and those who cook them. I believe that the consumptions of noodles are always high because they are affordable and can provide a very healthy meal, as it is a carbohydrate that can keep one fuller for longer and allows one to eat more vegetables and other nutritious add-ons. Also, noodles can be very versatile and can easily change and adapt to the ingredients that are present to specific countries, regions, and even the leftover ingredients residing in people’s refrigerator.

Noodles in Italy have a long history and mean a lot to them; it can even be seen in the amount of noodles they eat throughout their lifetime. I believe that pasta in Italy is a valuable asset for them due to the fact that they are a remembrance of the history of Italy. First, it represents the long and complex history of Italian pasta that has started from the Etrusco-Roman noodle, called lagane, a modern word for lasagna; there were several differences, such as the fact that it was oven-baked instead of boiled. The diversity and varied regional cuisine was influenced by the Arabic invasions of the 8th century. Also, it can be seen today that different regional differences in Italian cooking can be due to the different invasions that have occurred; Sicily has a heavy base on Saracens, while Fruili-Venezia Giulia has a strong Venetian taste that still reside in the cuisine. Second, pasta names and categories were named after important wars, emergence of science of machinery and more. This includes tripolini that was inspired by Libya, bengasini, inspired by Benghazi, and ruote, inspired by invention of wheels. All of these historical and groundbreaking events have led to the strong affection that they have for noodles. Also, I believe that the regional differences in noodles that they have all throughout Italy makes them special, as they are special for each region, based on the regional specialties, extrusions, and drying methods. A few days ago, I went to Whole Foods to make pasta and saw the different types of pasta that were present from all of the historical events that occurred. I would not have known that all the names have come from these types of events if I have not taken this course and learned about the backgrounds of these pasta.

Chinese noodles have a long history as well that originated from the Han dynasty, which has more than 4,000 years of history. Noodles, in fact, first started off as being referred to as cake. I believe that noodles mean their culture and lifestyle as there are many sayings, customs, traditions, that are based on noodles. I believe that one of the most famous examples would be the longevity noodles that Chinese eat on their birthdays, showing that longer the noodle, the longer you will live, and the longer you live, more longevity noodles you will get to eat! Another example are the noodles that hold a special value in their culture, such as the seafood noodles (dutiful son’s noodle), Dandan noodles (Sichuan), and sister-in-law noodles, also known as ashamed son noodles. All of these have anecdotes that hold a place in their cultural beliefs and lifestyles. Digging further into this topic, the sister-in-law noodles was a type of noodles that a scholar ate when he was preparing to pass the provincial civil service examination under the care of his sister-in-law. As people followed this tradition and failed, they started calling it the ashamed son noodles. I believe that stories, the historical, and cultural background that noodles have are the basis to their integral role that it has in China. While I was traveling Singapore, I ate a special glass noodles that was only eaten during Chinese Lunar New Year. The glass noodle was served with various meats and vegetables; everyone gathered around and started to mix them with their chopsticks together. This also was a cultural moment for me as I learned from my high school friends who were originally from that area.

Similar to what was explained above for noodles in China and Italy, Korean noodles have a long history that leads to its familiarity to people and attracting more affection. Janchiguksu is a long thin noodle served in a clear broth soup. This was typically served on birthdays or marriages as flour was considered to be very special and valuable. Similar to China’s saying, the long length of noodles had a meaning of long life and these saying are passed down until now, although now they can be eaten and found more easily.

If I were to create a definition of the world noodle, it would be “food typically created by egg or flour, that is boiled to be eaten with various seasonal/regional add-ons with sauce or in a soup that are likely to have a cultural background in each country that is based upon. By looking at different types of noodles in China, Italy, or Korea I believe that they all have a strong historical or cultural story that leads it to have such high affection by people. Noodles are essentially the simplest, yet the most versatile, staple food ingredient capable of encompassing the culinary of any culture, history, and region. 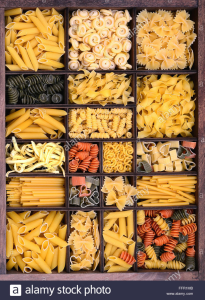 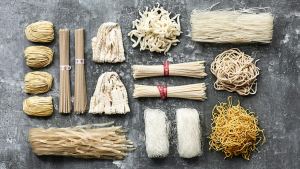 One Reply to “Omnipresent Noodles”