The noodle is both global and multidimensional: Noodles are consumed across diverse geographies and also represent symbolically far more than the sum of their physical parts. In countries where noodles are consumed, differences in ingredient make-up, form, and styles of preparation have contributed to the formation of regional and national identities. For example, when individuals living in a given geography choose to consume noodles, they often prefer to do so in ways similar to those living around them. In this way, the preparation and consumption of noodles by different groups of people further contributes to the noodle’s effect of establishing group identities. Moreover, noodles in countries around the world are still continuously evolving with the advent of new technologies, increased prominence of globalization, and constantly changing definitions of modern lifestyles. In the cases of China, Italy, and the United States, geography, industrialization, and migration are three factors that have played a sizable role in each country’s noodle narrative. In addition to examining these three aforementioned factors, there are other prominent ones that I hope to examine in greater depth on a country-by-country basis.

China: For the Chinese case, tradition and symbolism have also played an especially prominent role in the evolution of the noodle over time.

While the noodle is enjoyed across China, the ways noodles are prepared can differ greatly by geographic region or even city. According to Na Zhang’s article Noodles, Traditionally and Today, Chinese noodles originated in the Han Dynasty more than 4,000 years ago and also serve to “reflect the cultural traditions and customs of China” (Zhang, 1). Moreover, the noodle increased in popularity in China after the Industrial Revolution – for the Chinese case specifically, the advent of modern machinery in China allowed the noodle to transition from “a traditional handicraft industry to mass production” (Zhang, 1). Moreover, in the case of certain types of Chinese noodle dishes migration has played an especially prominent role in their origination and execution: Lanzhou la mian, or “Lanzhou handmade noodles” serve as an example of a situation where migration (in this case, Islamic migration across the Silk Road) directly gave way to a new type of dish. The trait that I seek to examine in further detail for the Chinese case is “cultural symbolism.”

While many Chinese noodle dishes have longstanding historical origins and traditions surrounding them, some dishes have stayed the same over time while others have kept similarities but changed. Notably, Saozi noodles are one dish that has changed little. According to A Bite of China, in the Chinese city of Qishan, Shaanxi, Saozi noodles have a 3000 year-old history and come with their unique noodle narrative. Notably, many Chinese noodle dishes also have their origins in folklore as well: According to Na Zhang, Saozi noodles are also called ashamed son noodles, a name that is likely based on a story as well. Moreover, the five main ingredients of Saozi noodles are imbued with deep symbolism: Fungus is “Black,” tofu is “White,” yellow eggs are “wealth,” red carrots are “prosperous life,” and lastly garlic sprouts symbolize “vitality.”

By contrast, dandan noodles also embody many cultural traditions but have arguably experienced a greater evolution than Saozi noodles with regards to how they are prepared and served. For example, while “dandan” used to refer only to the fact that street vendors carried the ingredients to assemble these noodles around on bamboo poles in Chengdu, the recipe for them has now become more-or-less standardized worldwide. Additionally, the ways of serving dandan noodles have changed greatly: Instead of just having them on street corners, dandan noodles can now be found in restaurants throughout China and around the world. In this way, dandan noodles serve as an example of a Chinese noodle dish with historical symbolism that has changed with modern times. In summary, the Chinese noodle narrative is both stagnant and changing: While some dishes remain the same since their origination, others have changed over time from their historical origins.

Italy: Shape and functionality are especially important in the Italian case with regards to the evolution of the noodle.

Like China, noodles in Italy change based off of local tastes and ingredient availability and are altogether extremely diverse.

The history of pasta in Italy goes back thousands of years. In doing so, it also reflects the influences of invasions and regional geographies. For example, the article “History of Pasta” from Life in Italy notes that Italian pasta on the island of Sicily might often contain ingredients such as “raisins,” thus serving as an example of how the Middle Eastern influence of invasions can be seen in Italy’s food. Moreover, in thinking about the regional geographies, the pasta that is enjoyed can differ significantly by Italian region or state. This is because of two main considerations: 1) Invasion, and the migration associated with it; 2) The presence of micro-climates in Italy.

Historically, Italy started with a type of pasta that was oven-baked. However, Arab and Chinese influences also helped shape Italy’s culinary noodle narrative. German and French influences impacted Italian pasta as well. Moreover, microclimates and provincial geographies even further influence the differences in the different types of noodles consumed throughout Italy. For example, those from Emilia-Romagna may serve their pasta with a “cream sauces or a simple sauce of butter and sage,” yet in the Piedmont region of Northwest Italy, pasta may be served “with a butter sauce” and “covered with slices of decadent local black truffles.” While Italian regions can differ greatly by language, geography, and culture, one can say that they are all arguably unified by their love of good cuisine, specifically pasta. Immigration as well has greatly shaped Italian food culture, particularly with regards to the example of Porto Palazzo, a market neighborhood in Turin, Italy where people from all over the world have set up ethnic restaurants and shops in coexistence with the local Italian population. Additionally, with regards to industrialization, one must consider that Italians rarely make pasta fresca (fresh pasta) anymore at home. The advent of the pasta machine, as well as the prominence of commercial dried pasta, have made it so that time-strapped modern Italians no longer see the need. Continuing on the trend of industrialization in Italy, both machinery and the importation of wheat have also helped shape Italy’s noodle narrative immensely.

The importance of shape is arguably the key differentiating element within the Italian noodle narrative. For example, according to Things and Ideas, “form leads to different flavor” and “there is no form without substance, and no substance without form” (Things and Ideas, 11). For example, different shapes have different capabilities with regards to their intended purposes (i.e. one might hold sauce better, be suited to specific preparations, etc.).. Additionally, different shapes of noodles in Italian cuisine also hit the eater’s taste buds in different ways. In doing so, they thus trigger different sensory reactions (i.e: a thin spaghetti noodle will hit the tongue in a different way than a thick rigatoni or spiraled fusilli). While certain shapes of pasta in Italy have been obtained through the advent of machines, others have been made by hand for centuries. Even if the materials comprising the noodles in Italy are the same (i.e. flour, water, eggs (sometimes), other ingredients (occasionally)), the fact that form influences taste and function to such a high degree is possibly unique to Italian cuisine.

Interestingly, for the Italian case, different shapes of pasta can also reflect identities. For example, the Neapolitans are often referred to by other Italians as the “macaroni eaters,” thus showcasing how something as simple as the shape of a pasta can become a social identifier. Others shapes of Italian pasta have stories as well (another example, manicotti,  came about through the Italian-American community). Thus, the Italian noodle narrative is influenced by shape, form, and function as well as the aforementioned factors of geography, migration, and industrialization.

United States: For the United States, the evolution of the noodle has also been prominently influenced by adoptions of foreign culinary traditions and innovations in processed food.

American cuisine is influenced by cultures from around the world. This is true in the case of noodles as well: An “American” noodle narrative has evolved greatly over time and contains influences from around the globe. A quick Google search for “American Noodles” reveals photos of different types of noodles from around the world. In the case of the United States, American cuisine was heavily influenced not only by the indigenous peoples of the US but also by individuals who came to the US as immigrants who brought their food traditions with them. If one might choose to go to a recipe website (such as this one, which I consulted: https://www.yummly.com/recipes/american-noodles), one can see a list of “American” noodle recipes with two distinctively “American” things: 1) Highly processed foods; 2) Global influences. Additionally, even popular American pasta dishes such as “mac and cheese” are actually influenced by other cuisines (in this example, British food). Lastly, American fast-food adaptations of noodles also play off of global cuisines, including those of China (ex: Panda Express, your neighborhood take-out joint, etc.) and Italy (Olive Garden, Maggiano’s Little Italy, Carraba’s Italian Grill, etc.).

Notably, like China and Italy, regional differences in American cuisine do still exist (ex: you may find a Cajun-influenced pasta in Louisiana or a shellfish-heavy version in New England), but for the realm of noodles they’re arguably far less significant. Yet, within the context of industrialization, the American noodle narrative has arguably been shaped even more so than China’s or Italy’s. For example, with regards to considering American processed food, the example of Kraft Mac and Cheese comes to mind. With its fluorescent orange cheese powder and numerous preservatives, the product has been engineered to fit a busy American lifestyle that values convenience and budget-conscientiousness. While China and Italy both have processed noodles as well, this invention in my mind was uniquely American. (Note: China specifically has many forms of highly processed foods, including noodles, yet the traditions associated with Chinese noodles form a more iconic part of a “Chinese noodle narrative” cultural identity than processed ones have). 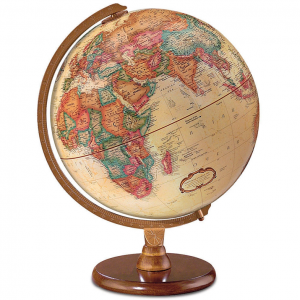 Noodles in a Single Image: Globe

One Reply to “Noodles: Evolving and Changing”