If you’ve ever taken MARTA from campus to downtown, you’ve seen it: rows and stacks of blue, green, yellow and red crates piled just outside your window, an industrial counterpart to the colorful Cabbagetown neighborhood along the other side of your train. 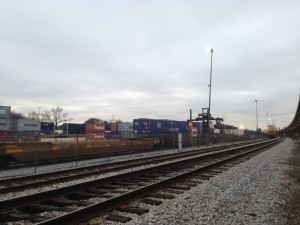 The Brobdingnagian Lego structure is Hulsey Yard, the largest freight hub in Georgia along the CSX railway.

Every day, more than 3,000 containers come in and out of the railway terminal, carrying anything from paper products to wine, according to an operations manager at CSX.

The site is an intermodal yard, which means it receives goods from both rail and road, on trucks. Because it’s a hub, the terminal is also a transfer point for the seven inbound trains that arrive each day.

It works like this: Target stores in the Chicago area are running low on a certain perfect beach towel, manufactured in Sarasota, Fla. An order is placed online and later the shipment is tacked onto 18-wheelers at the plant. The towels are trucked up I-75 until they reach a CSX terminal outside of Tampa. Next, they’re thrown aboard a freight train and make the trip north to Atlanta, arriving at the Hulsey Yard hub. From there, the towels trade trains and traverse middle America, arriving later that day in Chicago.

The rail yard, already busy with over 100 workers on a 24/7 schedule, could be seeing more action soon with a proposed plan to deepen the port of Savannah. The project, which has been in the works for years and recently gained the Obama administration’s support, would allow the port to welcome larger international freight ships, strengthening the state’s shipping industry and adding jobs to places like Hulsey Yard.

CSX has operated the rail yard since 1988, but Hulsey Yard has been around in some form or another since the turn of the century, along the east-west rail line that connects Atlanta to the rest of the country. The 6-acre yard itself sits in the shadow of a stately former cotton mill, now converted into loft apartments. The southern wall of the rail yard is also a hub for the Atlanta street art scene, including the Krog Street tunnel, which runs below it.