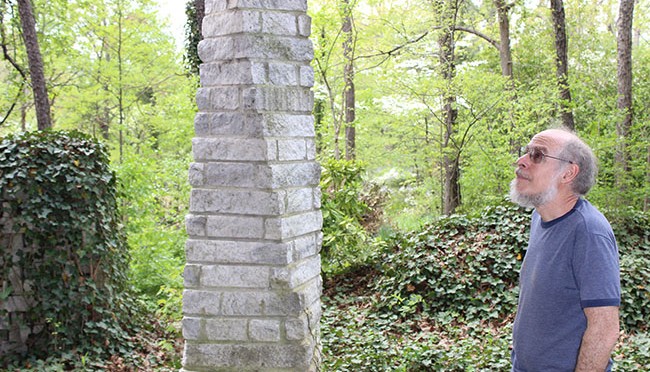 On the corner of a bustling Virginia-Highland intersection lies a set of worn stone steps. Trees line either side, masking all that lies beyond. The sight is mysterious, yet inviting. At the summit is an open lot enveloped with overgrown vines. It’s shady, with sunbeams peeking in through the canopy. Peaceful and still, there is no one in sight. But just beyond the vines and the brush, walls of gray stone and a dark wooden roof tower over the tallest of trees.

The Tower is not a house, but an art piece and work in progress. Jack Harich, a Georgia native, bought the lot in 1973 and began building two years later. Inspired by his motto “make it perpetually inspiring to live in,” Harich has been building the structure for the past four decades. He calls it a “design-as-you-go, pay-as-you-go, have fun type of art piece” — not a house.

“I just wanted to build something — build a house. Who’s to say why, but a lot of people build houses,” Harich says, reflecting on his motivation for beginning the project.

Harich sees his work as a craft, and for him, The Tower is a form of self- expression. The Tower has 100 tons of Cherokee marble and includes sections of White Oak and Yellow Pine. Each piece has been carefully integrated into the house to reflect Harich’s personality and creativity. The Tower’s form evolves as he does.

Harich’s first accomplishment was what he calls the stone circle. He originally designed it to be an outdoor accessory, but when he realized that it was a livable space, he continued to build around it. The stone circle now serves as stone pillars holding up the structure of the house. The stone circle, which now sits in the center of the lowest floor, is constructed of white marble for eight feet before it switches to wood. The structure is three stories high, shooting through the center of the house. At the top, Harich built the Crow’s Nest, a haven nestled away just beneath the roof. A wooden ladder ascends to a skylight that opens to the rooftop.

The base of the stone circle is now the core of the first floor – a space that Harich envisions to be his indoor workshop. It’s one of the largest open spaces in The Tower. And despite the Atlanta heat, the first floor will not contain air conditioning. The marble walls insulate the floor naturally through thermal mass, maintaining an average temperature of 56 degrees. The room will also have natural warming in the winter, retaining the heat. “You hardly have to heat it at all if you just bundle up a little in the winter,” Harich says. On the left is a section of the wall made entirely of thick translucent glass, allowing the sunshine to pour into the otherwise-dark lower level. Harich’s modern style incorporates two moon gates, which invite even more natural light to flow in, illuminating the room.

A wooden ladder from the outside leads upstairs. At the top, the light radiates through the windows constituting each of the main room’s walls. Harich says this room is meant to energize and inspire. The ceiling is awe-inspiring with grand arches and intricate carved designs. The wooden facade, sawed and nailed together by hand, took two years to complete. In 1995, Harich had twenty friends over for a weekend to help raise the timber frame. Six months later, Harich finished the joinery and decorative ceiling. Harich’s love for his wife, Martha, is palpable through the wooden carvings of hearts that crown each spectacular arch.

While the arched room is the most meaningful for Harich, the next room over, the guest room, is the most unique. Harich calls it the Tree Room. Built out of tree trunks, branches wind their way toward the ceiling. The tree trunks serve as a base to support the ceiling. With trees gracing outside the windows, the Tree Room becomes one with its surroundings.

And the artist? Jack is a jack of all trades. He’s as interesting as The Tower — maybe more so.

Meet Harich and find out the story behind The Tower here.