[View the story “Emory’s Guide on How to Succeed Without a Car: Date Night in Decatur” on Storify]

Read more about the spots this map has picked out here

As a college kid living on a budget, finding cheap, not entirely disgusting food is a habit upon which I pride myself. There are few restaurants in Atlanta that fit this description better than the countless burger joints throughout the city.

The options are endless—BurgerFi, Farm Burger, Flip Burger and Yeah! Burger to name a few, all of which raise the question of whether it’s state law to include “burger” in the name of all potential burger restaurants.

The answer to this question is no, as proven by Little Five Points’ Vortex, which possesses the king of all Atlanta burgers: Not the mildly disgusting Coronary Bypass specials that the restaurant is famous for, but a hidden gem—the Holy Guacamole burger. 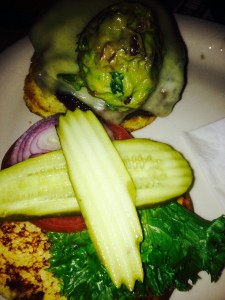 The Holy Guacamole is the King of Burgers, and should be worshipped as such. There’s nothing unusual about the burger, per se, apart from the fact that it has a huge, glorious glob of guacamole sitting on the patty, waiting to be squashed into a wondrous spread once the bun is applied. But this story isn’t about the Holy Guacamole burger, at least not entirely: it’s about my quest to find a guacamole burger in Atlanta that can rightfully claim to be its equal.

A quick look at a few menus made the job much easier for me. Yeah! Burger is the only other of the aforementioned restaurants to offer a guacamole burger, so off I headed to Virginia-Highland to try it.

I’d been to Yeah! Burger before, but I’d never tried the guacamole there—mainly because it’s subtly listed among their many one-dollar toppings. My expectations weren’t high. Yeah! Burger, in my admittedly amateurish opinion, was a middle-of-the-road burger joint, and the chances of it producing a challenger to the King seemed unlikely. Nevertheless, I included guacamole in my order and sat down to test.

Yeah! Burger’s creation passed the eye test with a generous C+. As opposed to Vortex’s glob, the guacamole was placed on the burger in a less than aesthetically pleasing spread. This resulted in a much smaller guac per capita ratio than desired. Looking at the burger and sighing ever so slightly, I dug in. The results are below:

It wasn’t bad at all. There was more guacamole than I expected, and while it wasn’t in the same ballpark as the Holy Guacamole, it was a viable alternative for about three dollars less.

I should add here that failing to live up to the King of Burgers is nothing to be ashamed of. Yeah! Burger is a fine establishment that advertises simple, tasty burgers and certainly lives up to expectations. Just don’t expect too much.

Here’s a map of some of the best burger places in Atlanta, so you can form an opinion for yourself.

Explore some worthy spots in Virginia-Highland with my interactive map!  Everything is walking distance so leave your gas-guzzler behind!

See the map below for the 14 Major Parking Lots and Decks for the City of Decatur.

Uh oh. Apparently, you’ve miscalculated the amount of vodka shots you took on Fraternity Row. As your eyes slowly adjust, you realize with a sigh of relief that your current location does not appear to be a holding cell in jail. The panic soon wells up again when you see that you are laying down. In a hospital bed. At the place you only knew by billboards all over the ATL. Grady Memorial Hospital.

Don’t start screaming and passing out with fear quite yet. Here are the top eight things you need to know if you wind up at 80 Jesse Hill Drive.

Hopefully this will be your first and last involuntary trip to Grady. Go easy on the alcohol next time, and good luck.

For more information about Grady Memorial Hospital, visit their website at www.gradyhealth.org