This is a graphic representation of the phylogenetic tree showing relatedness between dogs and wolves as it compares to outgroup (less related) species which branches off to form new species earlier on in history. The images show structural similarity and differences between the three species as well.

Dogs are the classic American pet, but how much do you really know about them? Dogs’ behavior is quite similar to humans’. For instance, even puppies that haven’t interacted with humans show social and cognitive skills on par with human children. This is surprising, considering their closest relative in the wild is the wolf, which is known to be more aggressive and less compatible with people. Wolves raised by humans don’t develop the same mental and social skills that domesticated dogs do. In addition, dogs are less fearful and more playful than wolves. This divergence is due to artificial selection by humans over many generations, which has resulted in dogs with improved tameness and temperament, which were reinforced by a population bottleneck – a significant reduction in population size.

Ancestors with dog-like characteristics originate in the fossil record up to 33,000 years ago. It appears dogs were first domesticated about 16,000 years ago, which actually happened before the development of agriculture. They then completely diverged from wolves 14,000 years ago, and there is evidence suggesting that dogs emerged from a single species of ancestral wolf. This divergence occurred via bottlenecks, significant reductions in population size, in both species, which were especially pronounced in dogs, from 32,000 to less than 2,000 individuals – a 16-fold reduction – and less so in wolves, which only experienced a threefold reduction. It is unclear why this reduction in wolves occurred, but it happened before humans began intentionally hunting them.

It’s interesting that, with so many behavioral and physical differences, dogs and wolves actually have very similar genomes. What’s different is which genes are being expressed, including those involved with cognition, memory, growth, and social skills. These differences in gene expression are driven in large part by artificial selection. Humans also influenced the morphology of dogs, including coat color variation, reduced cranial volume, and smaller skeletal size. These changes in morphology could potentially be deleterious because a possible effect of artificial selection may be a reduction in purifying selection, which ordinarily eliminates characteristics that are unfavorable in the wild. Research shows that humans may also have selected for behavioral traits, and these traits may have been selected for even before morphological traits. Not only did humans select for behavioral traits but food, shelter, and water availability given to them by humans are specifically responsible for differences in hypothalamic gene expression – a region associated with behavior and intelligence.

As a result of these selective pressures dogs have evolved different pack mentalities than wolves. Whereas wolves have a pair-bonded family unit that collaborates in hunting and rearing babies, dogs are less inclined to stay with one mate, are less active in raising their young, and are more dependent on human-provided resources. Overall, dogs’ and wolves’ different social, behavioral, and physical characteristics reflect speciation and domestication.

For more information, please refer to the following sources:

If it looks like a duck, and it quacks like a duck, well, it might not be a duck. This adage also applies to Doriopsilla areolata, a type of sea slug. In these cases we often want to use visible traits to identify species. However, many species look indistinguishably the same, while being distinct.  Species are acted on by evolutionary processes independently of other populations. For a new species to arise, a population of individuals must become isolated, then mutations and natural selection will allow this populations to diverge from the population from which it is isolated. If the populations come back together and cannot interbreed or their offspring often have lower fitness, then they can likely be considered a different species.

Doriopsilla areolata, also known as one type of sea slug, is found in many areas of the world such as Spain, South Africa, and the Caribbean (Goodheart & Valdes, 2012). Scientists originally thought that there was only one species of this sea slug but after research they have discovered that many other species exist. 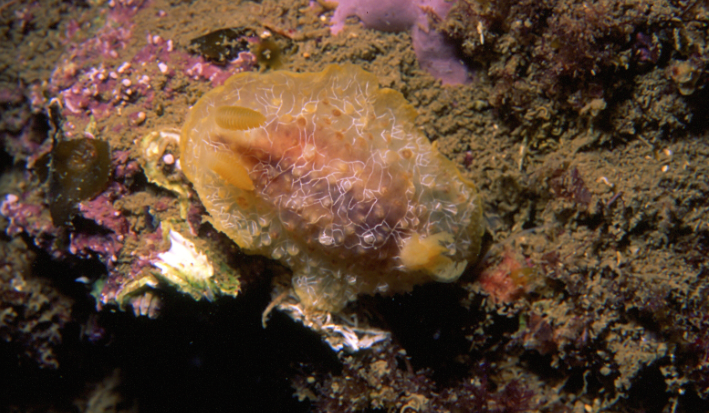 In recent history there have been major technological advances that allowed evolutionary biologists to identify differences in their DNA. For sea slugs and other members of the Doriopsilla genus, researchers found several mutations and variations in rRNA sequences that were present only in members of the same species (Cortes et al. 2009). Researchers were also able to analyze parts of digestive and reproductive anatomy at a microscopic level, finding high variability between species, making it unlikely that they would interbreed (Hoover et al 2015).

Doriopsilla areolata is a species of sea slug that can be found in the area ranging from Southwest Africa to Spain, with one of the broadest geographic ranges (Goodheart et al, 2012). Doriopsilla miniata is a colorful species of sea slugs that is found along the Pacific region of Japan (Hirose 2014). Another species studied is Doriopsilla gemela which is a species of slug found on the north eastern coast of the pacific, and their sister species, D. albopunctata is found on the coast of southern California (Hoover 2015).

Not all populations are separate species, however. For example, since Doriopsilla does not travel long distances, it has been proposed that geographic separation would reliably lead to speciation (Goodheart & Valdes, 2012). However, in the case of the three D. areolata subspecies near the Caribbean, Africa, and the Mediterranean there was no significant genetic difference. Because of this, it is believed that the populations are interbreeding to a degree, and that the three groups, each called a subspecies, are actually one according to biological and genetic evidence.

These sea slugs are the perfect example of how speciation is more complex than what we see.

For added fun, see our creative comic which summarizes speciation in sea slugs below! 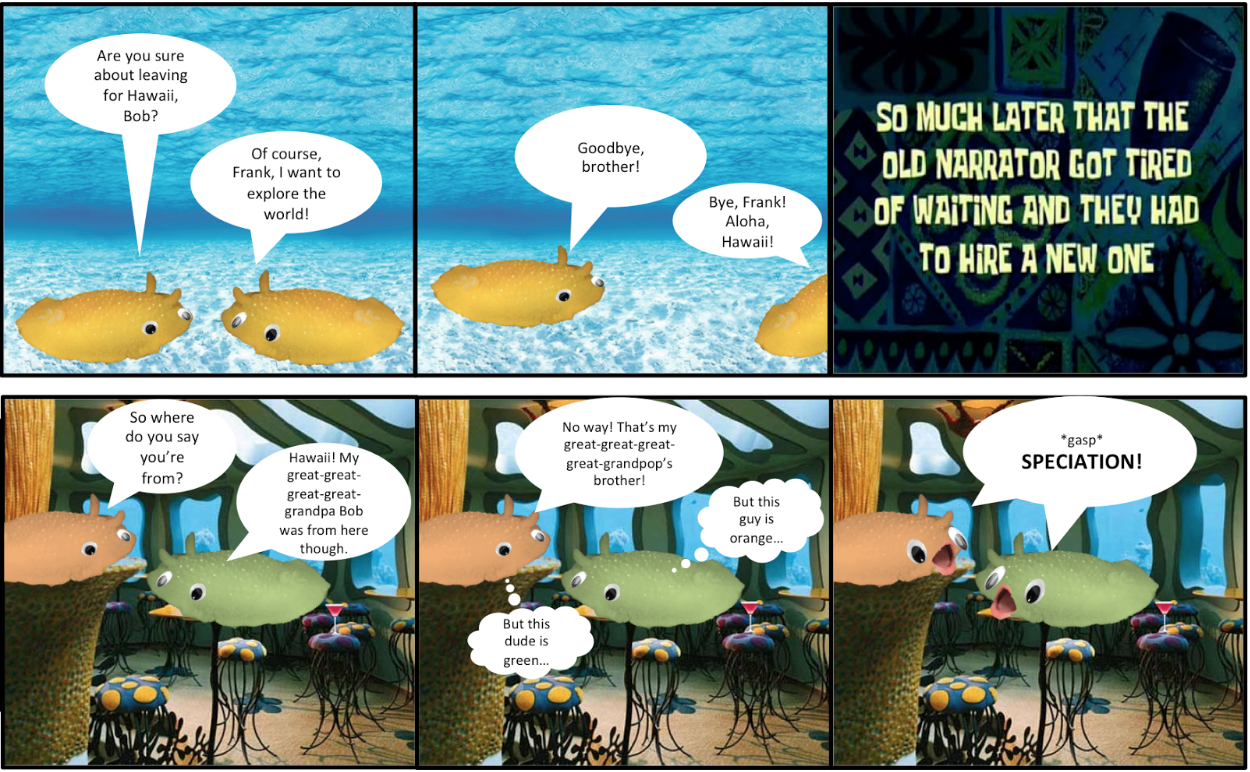 In the course of time, species that were once related can evolve and diverge from one another. This is the concept of speciation. Although speciation is marked by changes in color in the cartoon above, this is not always the case and different species may actually end up looking quite similar.

The core idea of modern evolutionary theory is that all life is descended from a common ancestor. Though the theory garners much scrutiny and skepticism, it can be explained in part through the simple mechanism of natural selection. Natural selection takes advantage of the variability that exists within the genome. Random mutations that occur in the genome are behind these variations and sometimes change the fitness of an organism. Natural selection dictates that those with higher fitness survive and reproduce; thus, certain traits are selected for within the species. This process explains how gradual change occurs and how complex organisms arise from simplistic ancestors. A common misconception regarding evolution is that life evolved randomly, or by chance. This misconception could arise because of the random nature of mutations that promote variability. Though randomness is an important component to evolutionary theory, natural selection and survival of those who are more biologically fit make sure that the process is non-random.

Known for their characteristic black and white “tuxedos”, penguins are an aquatic, flightless bird found in both warm and cold climates. Because such a large part of their lives are spent in the water, certain species of penguins will only exit the water to shed their feathers or to mate. Spending nearly 75% of their lives in the water foraging for food, penguins have developed very specific traits optimized for swimming.  Utilizing their strong forelimbs to propel their large bodies through the water, penguins have undergone very specific evolutionary changes that allow this mechanism to run smoothly. As discussed in Michael Habib’s paper on structural evolution, the strength of the bones in the forelimbs are significantly greater than that of birds who do not exhibit aqua-flying behavior (2009). In conjunction with increased bone density, more muscle mass also developed and aided in keeping the penguins warm in their cold feeding environment.

Closer inspection of the features that aid water-feeding behavior provides more evidence that disputes the misconception that evolution is random. As seen in 2006 by Slack and colleagues, macroevolution within penguins based on their fossils and mitochondrial genes was tracked and recorded. The evidence showed that the penguins’ bodies gradually adapted to the cold feeding environment over many generations. Additionally, researchers Thomas and colleagues observed in 2010 that cold water penguins have a flow of heat along their wings that originates from the brachial artery called the humeral plexus.  This vascular countercurrent heat exchanger (CCHE) provides penguins the opportunity to forage in cold water by limiting heat loss through the flippers. Scientists identified this adaptation through fossil evidence and, upon further research, learned it evolved after penguins lost the ability of aerial flight. Researchers have proposed the CCHE evolved to help balance the energy costs of longer foraging times, since the oceans were significantly cooler than penguin body temperature. Ultimately, researchers have concluded that the humeral plexus was instrumental in allowing penguins to be water feeders in subaquatic environments.