Contributed by So Heui Kim 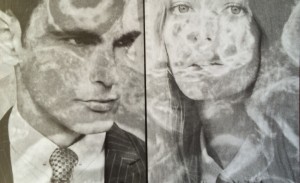 This black and white photo was created by using the sandwich technique. I randomly chose the faces from a magazine. The third negative is a photo of human cells. My intention was to create a photo that illustrates how our cells and the genes within them are involved in our mate choice.

Despite a lot of interest, it is not clear what traits determine what mates humans choose. It sometimes seems that each individual has different preferences. Humans can be influenced by many factors, including parental guidance, the environment, education, attractiveness, and the media. Some research suggests that despite these influences, human mate choice is based on genetic similarity.

The major histocompatibility complex is believed to take a huge role in human immune system. The MHC molecules bind pathogen-derived peptide fragments and display them on the cell surface to be recognized by the T cells (Janeway, Travers, Walport et al, 2001). These MHC molecules help our body to recognize and eliminate the harmful pathogens. Therefore, maintaining MHC diversity is a key to human survival. The more diversity there are in MHC molecules, the more pathogens will be killed.
In “Major histocompatibility complex peptide ligands as olfactory cues in human body odor assessment”, researchers found out that humans have the ability to detect and evaluate body odor by MHC peptides. In the experiment, human volunteers were asked to apply two different solutions of MHC peptide ligands under their armpits. Then, the participants had to decide which armpit smell they preferred. Participants preferred their body odor more typical of individuals with an MHC profile like their own. This result strongly supports the findings that humans with similar MHC alleles also have similar perfume preference. Unlike when smelling armpits, women prefer the odor of shirts worn by men with different MHC alleles. By mating with a person who has dissimilar MHC genotype, they will maintain their offspring’s MHC diversity.

Wearing perfume is considered one way to attract a mate. Based on the results from the experiments above, we can consider how MHC should impact perfume selection. From the armpit experiment, we can predict that people will prefer to wear perfumes that are similar to their MHC peptides. In “Evidence for MHC-correlated perfume preferences in humans”, researchers found that there is a strong correlation between one’s MHC and their perfume choice. In the first experiment, participants were asked if they liked the smell or not. In a second experiment, participants were asked if they liked the smell, and if they wanted their mates to smell like that. From these experiments, they found out that people sharing specific MHC alleles also share preference for specific perfume odor. In other words, there was a strong correlation between MHC type and one’s preference for the perfume ingredients such as musk, rose, or cardamone. Although this research could not assess which odors were related to MHC, it provides the basis for studies that can test the relationship between the MHC and perfume in more detail. If we can find which odors are related to MHC, we can analyze what perfumes can attract potential mates. If so, we can wear perfumes to not only enhance our body odors, but also to attract our mates.