Remember your mom telling you that cheaters never win? Well, she needs to take another look at nature and receive a lesson from the spectacular cuttlefish. Through sexual selection, smaller male cuttlefish, aptly called “sneaker males” have evolved an alternate mating system allowing them to successfully compete with the larger males for mating time. Specifically, the sneaker males take on female coloration, hide their masculine fourth arms, and hold the rest of their arms in the posture of an egg-laying female, in a bid to sidle up to a guarded female. 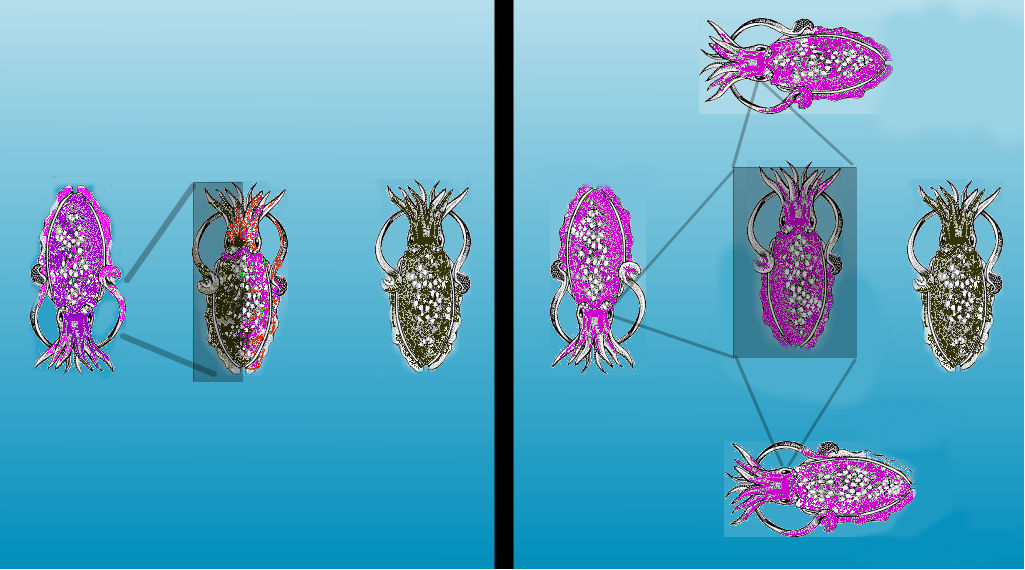 Cuttlefish display strategies. In the left panel, a sneaker male (center) displays towards the female on the right while not displaying towards the male on his left. In the right panel, there are males on three sides. Rather than try to appear like a female to all of them, the sneaker males chooses to fully display.

Because the sneaker cuttlefish use bright colors to conceal their male features, they are able to avoid aggression from the larger males and increase their chance of mating. Males who know that they can’t win in display or physical combat will sometimes display the brown and white pattern of the female while two other males are fighting over a female.  This allows him to get close to the female and slip her a sperm sac while the other guys are fighting!

Females are the deciding factor on whether or not to accept the males’ advances. In a fertilization study with the cuttlefish, the researchers observed that mimickers succeeded in fertilizing females 60 percent of the time, meaning that this method actually works.

This novel mating system is driven by sexual selection, which is not another term for natural selection. Sexual selection only deals with the driving forces of individuals to increase their reproduction rate, usually by whatever means necessary. In some cases, although the evolved feature may increase their reproduction rate, it can negatively affect their survival. Sneaker cuttlefish use more energy to keep their physical appearance and are more visible in the ocean, which can lead to decreased survival. This disproves the misconception that natural selection works only for the good of the species. If sexual selection allows the animal to reproduce more, the animal accepts that he may have a lower chance of survival.

You may have heard that a big part of evolution is that only the strongest, and largest amongst the population can survive. These cuttlefish show us that you don’t have to be big or strong, you just need to be smarter than the other guys and be fit enough.

2. Adaptive Coloration in Young Cuttlefish (Sepia Officinalis L.): The Morphology and Development of Body Patterns and Their Relation to Behaviour R. T. Hanlon and J. B. Messenger Philosophical Transactions of the Royal Society of London. Series B, Biological Sciences Vol. 320, No. 1200 (Aug. 12, 1988) (pp. 437-487) Page Count: 69 http://www.jstor.org/stable/info/2396667#bibInfo