Did you know that over 15 million Americans suffer from food allergies today? Consider this. Every 3 minutes, a food allergy reaction sends someone to the ER. Given these severe, potentially life-threatening medical conditions that have no known cure, we think studying the origins of food allergies can have significant clinical implications. So what exactly is a food allergy?

Food allergies manifest as adverse immune system reactions to harmless food substances. Once the allergen enters the body, it will be recognized by and bind to serum immunoglobulin E (IgE) – antibodies found in the lungs, skin, and mucosal membranes. IgE is attached by FcɛRI surface receptors on mast cells, an immune cell that helps the body create inflammatory responses. Interestingly, studies have shown that the high-affinity IgE-FcɛRI receptor binding is involved in responding to not only allergen exposure, but also parasite invasion. 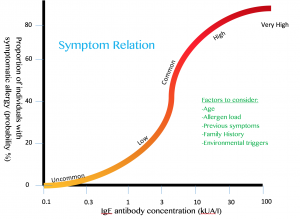 After the binding occurs, the allergen will cause antibody cross-linking on the mast cell surface and lead to something called mast cell degranulation, which means the mast cell will release its internal pro-inflammatory molecules, like histamines, leukotrienes, and prostaglandins, into the bloodstream. This will cause the onset of the allergy symptoms many of us may know well (especially in the pollen-rich spring) – sneezing, itching, coughing, hives, GI discomfort, etc. The most severe of these is anaphylaxis, a rapid and potentially life-threatening body state where blood pressure is lowered and emergency symptoms arise as a result. This brings us to our central question: why would evolution naturally select for us to be allergic to food that sustains us? The anomaly of food allergies and their past, present, and future benefits remain largely poorly-defined. However, research shows us that IgE antibody recognition of the allergen and shared defense mechanisms play a significant role in evolving allergic responses over time.

Although not fully understood, allergic responses are thought to have evolved from an immune defense mechanism against parasite invasion and other harmful toxin colonization. For years, scientists saw allergies as genetic accidents where aberrant IgE antibody production was just a mishap. But given the conservative nature of evolution, the IgE antibody class couldn’t have just arisen to be destructive only in the case of genetic disorders. Even if they did, evolution wouldn’t keep them around if they were solely harmful. In 1991, Margie Profet created the toxin hypothesis – the idea that responding to toxins and allergic reactions occur in very similar ways, that allergies are inherently toxic or affiliated with toxic substances, and that allergic responses mostly involve symptoms by which toxins are expelled (sneezing, vomiting, coughing, etc.) Last month, scientists at Stanford published evidence supporting the sustained positive evolutionary pressure to keep these IgE antibodies around. First, they found that in normal mice, previous exposure to venom allowed for greater survivability following a lethal venom injection, as compared to mice who were only treated with control solution. Then, they tested the role of the allergic pathway. Specifically, they studied three different types of mice responding to bee venom injections – mice without IgE, mice without IgE receptors on mast cells, and mice without mast cells at all. Unlike the normal mice, the three mutants did not benefit from previous venom exposure, since they did not have the key immunological players coordinating allergic response (Tsai, 2015). Although allergies have become less threatening in our daily lives, this allergic-type, IgE-associated immune response provides support for the idea that allergic responses are closely linked to the ways in which our bodies fight off toxins, long ago and today.

In another study published in October 2015, researchers at the London School of Hygiene & Tropical Medicine hypothesized that there must be some molecular similarity between parasites and allergen proteins, as the same branch of the immune system is found to kick in in both circumstances. After extensive data analysis, the team found that 2,445 known parasite proteins were structurally and sequentially (think base pairs A, C, T, G) similar to those found in the portion of the allergen that is prone to immune system attack. Further, measuring human cell immune response to a protein from a parasitic worm that was similar to a protein from a prevalent pollen allergen family revealed that blood serum reacted against both worm infection and the allergen via the same antibody mechanism (Tyagi, 2015).

Overall, the precise origin of food allergies has yet to be defined. However, we can infer that thousands of years ago, our ancestors may have consumed foods that contained harmful proteins or mimicked harmful substances, so allergies may have very well evolved to protect us. For example, someone could have ingested a raw plant that looked like a poisonous plant in the same family, so his body was on high alert. The IgE response naturally kicked in and perhaps was sustained throughout several generations as a heritable characteristic because it gave certain individuals an advantage over others in surviving and reproducing. As a result, those advantaged individuals likely passed on these beneficial traits, so eventually the proportion of individuals with these advantageous characteristics increased because those who didn’t, would lesser survivability.

This beneficial defense mechanism is not a novel idea – if unwanted substances enter the body, whether it just appears to be harmful or actually is, the organism’s ability to survive is potentially at stake. Thus, evolution would select for mechanisms by which these substances can be fought internally and expelled from the body. It therefore makes perfect sense that evolution would select for allergic responses as a means to protect one against destructive parasites and toxins.

Ultimately, food allergies account for $25 billion dollars in health costs each year, and cause 30,000 cases of anaphylaxis, 2,000 hospitalizations, and approximately 150 deaths annually. This significant burden on our population’s health warrants study of how allergic responses occur and the reasoning behind why they do. In doing so, perhaps we can find a cure! But for now, keep in mind that food allergies aren’t necessarily all bad and that they might actually be shielding you from something far worse.

Brandtzaeg, Per. 2010. Food Allergy: Separating the Science from the Mythology. Nature Reviews Gastroenterology & Hepatology 7, no. 7: 380–400.

Liu, Andrew H. 2015. Revisiting the Hygiene Hypothesis for Allergy and Asthma. Journal of Allergy and Clinical ImmMatricardi, P. M. 2014. Molecular Evolution of the Allergy. Allergologie 37, no. 10: 423–24.

Zusi, Karen. 2015. An Evolutionary Basis for Allergies. The Scientist. http://www.the-scientist.com

Why do giraffes have long necks? The theory is quite more complicated than expected. Although it’s something that we rarely question, evolutionary scientists have been debating the answer to this question for years. Conveniently, this matter addresses a common theme and misunderstanding of evolutionary biology that we can learn from.

To begin, there are two leading hypotheses as to why giraffes have such long cervical vertebrae. The first, known as the ‘competing browsers’ hypothesis, states that their long necks evolved over time to gain the advantage of being able to reach the leaves of tall trees for feeding. The second, known as the ‘necks for sex’ idea, states that this trait evolved as a weapon that allows males to battle each other to gain dominance for mating with females.

A common misconception is that natural selection produces animals that are perfectly suited for their environment. Unfortunately, evolution does not work to create the “perfection version” of an organism. For example, while it seems that it would be advantageous to have the longest neck in the population, studies show that long necks require increased nutrition for maintenance of health and extreme blood pressures to pump blood from the heart to the brain. Furthermore longer necks may attract predators more easily and may slow down escaping. Evolution is filled with many trade-offs in which a trait is beneficial in one context but harmful in another. There could potentially be a giraffe that not only is suitable for battling rivals and feeding off tall trees but also at the same time easily hidden from predators, but evolution may not necessarily be working towards an “upgrade.”

So what is the correct answer? Perhaps, an unsatisfying “both.” The ‘competing browsers’ idea doesn’t work alone because in the driest seasons, when it would seem the most beneficial to have the longest neck to reach for leaves no other animals could, giraffes tend to feed from shrubs. Even ordinarily, giraffes often feed at shoulder level and “bend over” to do so. The ‘necks for sex’ idea also doesn’t work alone because it doesn’t explain why female giraffes have long necks since they don’t engage in battles for mating.

This returns us to a common theme of evolutionary biology. Evolution is “survival of the fit enough,” more so than “survival of the fittest.” It doesn’t require perfection. Many organisms with varying traits are able to survive and reproduce, and this perhaps leads to the beautifully diversity we see today. The giraffe may not be the perfect organism, but the giraffe is the perfect giraffe. Check out some of the recent research on Giraffe Necks: